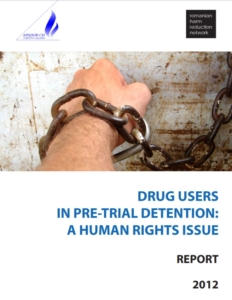 This report is the result of documentation and analysis of information and opinions available on applying pre-trial detention in the case of drug users. The research was conducted within the project “Drug users in pre-trial detention – a human rights issue”, funded by Open Society Institute and implemented by the Romanian Harm Reduction Network, together with the Association for the Defence of Human Rights – Helsinki Committee as main partner, along with the General Inspectorate of Romanian Police and the National Administration of Penitentiaries, as institutional partners.

The project goal is to raise decision makers awareness on the benefits of reducing the use of pre-trial detention for drug users in Romania based on the assumption that, at least some cases, therapeutic measures are more useful than incarceration and on the finding that the alternative to imprisonment are rarely applied in cases of drug users.
The report includes a review of the main provisions concerning the application of preventive arrest measure to drug users, drug users’ views and expert opinions on procedures and the effects of judicial provisions concerning drug users in pre-trial detention. Based on data analysed, a set of conclusions and recommendations was developed, representing proposals to improve the current legislation, procedures and practices related to the application of pre-trial detention to drug users.

The first chapter contains background information and a legal framework analysis of the provisions regulating PTD and on the application of criminal sentences for drug offences.
The second chapter includes comments on statistical data and on the benefits and costs of applying PTD to drug users, the Romanian anti-drug legislation and related topics. In rendering expert opinions we aimed to cover all institutions or functions that occur around a person remanded in custody referring to drug users. Thus, using unstructured interviews, we documented opinions of judges, prosecutors, police, lawyers and doctors with regards to pre-trial detention.
The third chapter presents drug users’ perspective on pre-trial detention from a very personal point of view: their direct experience. This section contains information about detention conditions, the relationship between investigators and investigations, possible abuses and violations of procedures alleged by the interviewees. Thus, in several interviews, discussions focused on abuses from police and prosecutors, mainly residing in psychological pressure using article 16 of law 143/2000, threatening and insults, treatment deprivation, blocking access to evidence, using withdrawal as a tool in order to get a declaration. We are aware that these allegations coming from the people we interviewed concerning their own experience in pre-trial detention are hard to prove and some of them might be pure fiction. However, given the frequency of such remarks during the interviews but also in separate discussions with drug users accessing harm reduction services, we decided to take this opportunity to draw public attention on these potential abuses against people who use drugs. Our goal is not to make justice to people, who pretend having been victims of institutional abuse during pre-trial detention, but to draw attention on the existence of such practices and to contribute to diminishing them.
The fourth chapter contains an analysis of ECHR jurisprudence on violations of Article 5 (the right to liberty and security) of the European Convention on Human Rights. This chapter is intended to provide examples of European jurisprudence on the application of pre-trial detention and the reasons behind decisions and solutions offered by the ECHR.
The last section contains conclusions and recommendations developed based on the analysis of the entire volume of information collected and it ends with proposals to be submitted to decision makers attention in order to improve the current legislation and practices regarding the application of preventive arrest measures.

As representatives of civil society, we believe that our mandate is to draw the attention of state authorities and public opinion over some facts or circumstances which, in our opinion, represent voluntary of involuntary human rights violations and to require the authorities to analyze the information submitted and take appropriate measures in order to improve the current procedures and practices in applying pre-trial detention to drug users.